Language of this discussion is english. Discussion read 2282 times

Varis
2012.04.13. 22:19
What is cancer? What causes cancer?
What are the symptoms of cancer? How to classify cancer? How is diagnosed as a cancer?
How can cancer be prevented? How to eat to prevent cancer.

Varis
2012.04.18. 23:43
Dr. Simoncini, an oncologist in Rome, Italy has pioneered sodium bicarbonate (NaHCO3) therapy as a means to treat cancer. The fundamental theory behind this treatment lies in the fact that, despite a number of variable factors, the formation and spreading of tumors is simply the result of the presence of a fungus.

Sodium bicarbonate, unlike other anti-fungal remedies to which the fungus can become immune, is extremely diffusible and retains its ability to penetrate the tumor, due to the speed at which the sodium bicarbonate disintegrates the tumor. This speed makes fungi's adaptability impossible, rendering it defenseless.

Selective arteriography represents a very powerful anti-fungal weapon that is painless, leaves no after effects, and has very low risks. It is possible to reach almost all organs with a sodium bicarbonate solution, resulting in treatment that is harmless, fast, and effective.
Based on years of scientific and clinical research, at the centre of every cancer tumour is a common fungus, Candida albicans. The good news is that it can be treated with a powerful antifungal agent that's inexpensive and readily available.

Varis
2013.11.05. 09:51
This AMAZING & SUPPRESSED FRUIT is 100 TIMES STRONGER At KILLING CANCER Than Chemotherapy
The Soursop is a flowering, evergreen tree native to tropical regions of the world. It also contains a long, prickly green fruit which happens to kill cancer up to 10,000 times more effectively than strong chemotherapy drugs, all without the nasty side effects and without harming healthy cells.

According to Cancer Research UK, Annona muricata is an active principle in an herbal remedy marketed under the brand name Triamazon. The licensing for this product in the UK is not accepted due to its enormous healing effects on the and potential loss of profits for competing pharmaceutical cancer drugs.

This tree is low and is called graviola in Brazil, guanabana in Spanish and has the uninspiring name “soursop” in English. The fruit is very large and the subacid sweet white pulp is eaten out of hand or, more commonly, used to make fruit drinks and sherbets.

Besides being a cancer remedy, graviola is a broad spectrum antimicrobial agent for both bacterial and fungal infections, is effective against internal parasites and worms, lowers high blood pressure and is used for depression, stress and nervous disorders.
Deep within the Amazon Rainforest, this tree grows wild and could literally revolutionize what you, your doctor, and the rest of the world thinks about cancer treatment and chances of survival.
Research shows that with extracts from this miraculous tree it now may be possible to:

* Attack cancer safely and effectively with an all-natural therapy that does not cause extreme nausea, weight loss and hair loss

* Feel stronger and healthier throughout the course of the treatment

* Boost your energy and improve your outlook on life

The source of this information is just as stunning: It comes from one of America’s largest drug manufacturers, the fruit of over 20 laboratory tests conducted since the 1970′s. What those tests revealed was nothing short of mind numbing…Extracts from the tree were shown to:

* The tree compounds proved to be up to 10,000 times stronger in slowing the growth of cancer cells than Adriamycin, a commonly used chemotherapeutic drug!

* What’s more, unlike chemotherapy, the compound extracted from the Graviola tree selectively hunts down and kills only cancer cells. It does not harm healthy cells!

The amazing anti-cancer properties of the Graviola tree have been extensively researched–so why haven’t you heard anything about it?

The drug industry began a search for a cancer cure and their research centered on Graviola, a legendary healing tree from the Amazon Rainforest.

It turns out the drug company invested nearly seven years trying to synthesize two of the Graviola tree’s most powerful anti-cancer ingredients. If they could isolate and produce man-made clones of what makes the Graviola so potent, they’d be able to patent it and make their money back. Alas, they hit a brick wall. The original simply could not be replicated. There was no way the company could protect its profits or even make back the millions it poured into research.

As the dream of huge profits evaporated, their testing on Graviola came to a screeching halt. Even worse, the company shelved the entire project and chose not to publish the findings of its research!


Where Can You Find It?

As far as the fruit goes, you may be able to find it at some grocery and health food stores in your area. There are several different soursop juice manufacturers, distrubutors and suppliers worldwide. Caution would be warranted in purchasing from any company unless you have researched their reputability and extraction methods. 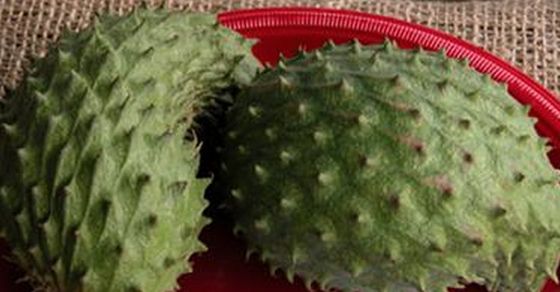